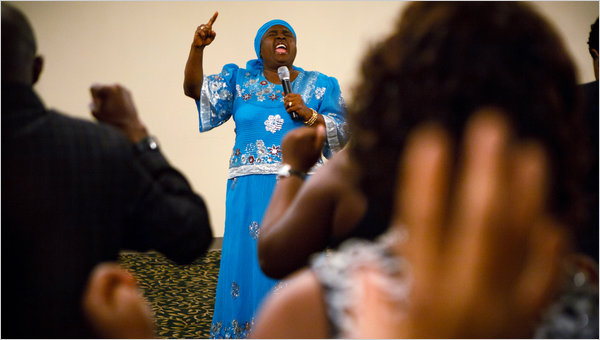 [I felt compelled to share this article from the New York Times, about a loud Nigerian preacher, Helen Ukpabio, who is waging a war against witchcraft. Keep in mind as you read this that the actions of Helen Ukpabio are not ancient history. ~ Claire]

At home in Nigeria, the Pentecostal preacher Helen Ukpabio draws thousands to her revival meetings. Last August, when she had herself consecrated Christendom’s first “lady apostle,” Nigerian politicians and Nollywood actors attended the ceremony. Her books and DVDs, which explain how Satan possesses children, are widely known.

So well-known, in fact, that Ms. Ukpabio’s critics say her teachings have contributed to the torture or abandonment of thousands of Nigerian children — including infants and toddlers — suspected of being witches and warlocks. Her culpability is a central contention of “Saving Africa’s Witch Children,” a documentary that made its American debut Wednesday on HBO2.

Those disturbed by the needless immiseration of innocent children should beware. “Saving Africa’s Witch Children” follows Gary Foxcroft, founder of the charity Stepping Stones Nigeria, as he travels the rural state of Akwa Ibom, rescuing children abused during horrific “exorcisms” — splashed with acid, buried alive, dipped in fire — or abandoned roadside, cast out of their villages because some itinerant preacher called them possessed.

Their fellow villagers have often seen DVDs of “End of the Wicked,” Ms. Ukpabio’s bloody 1999 movie purporting to show how the devil captures children’s souls. And some have read her book “Unveiling the Mysteries of Witchcraft,” where she confidently writes that “if a child under the age of 2 screams in the night, cries and is always feverish with deteriorating health, he or she is a servant of Satan.”