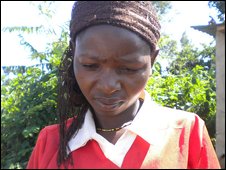 Villagers, many straight from their farms, and armed with machetes, sticks and axes, are shouting and crowding round in a big group in Kenya’s fertile Kisii district. I can’t see clearly what is going on, but heavy smoke is rising from the ground and a horrible stench fills the air. More people are streaming up the hill, some of them with firewood and maize stalks.

Suddenly an old woman breaks from the crowd, screaming for mercy. Three or four people go after her, beat her and drag her back, pushing her onto – what I can now see – is a raging fire.

I was witnessing a horrific practice which appears to be on the increase in Kenya – the lynching of people accused of being witches. I personally saw the burning alive of five elderly men and women in Itii village. I had been visiting relatives in a nearby town, when I heard what was happening. I dashed to the scene, accompanied by a village elder. He reacted as if what we were watching was quite normal, which was shocking for me.

As a stranger I felt I had no choice but to stand by and watch. My fear was that if I showed any sign of disapproval, or made any false move, the angry mob could turn on me. Not one person was protesting or trying to stop the killing. Hours later, the police came and removed the charred bodies.

Village youths who took part in the killings told me that the five victims had to die because they had bewitched a young boy.

“Of course some people have been burned. But there is proof of witchcraft,” said one youth.

He said that a child had spent the night walking around and then was unable to talk the following morning – except to one of the so-called witches.

I asked the youths whether or not people involved in this supposed witchcraft should be punished.

“Yes, they must be punished, every one,” said the first youth.

“We are very angry and that’s why we end up punishing these people and even killing them.”

His friend agreed: “In other communities, there are witches all round but in Kisii we have come up with a new method, we want to kill these people using our own hands.”

I later discovered that the young boy who had supposedly been bewitched, was suffering from epilepsy. His mother had panicked when he had had an attack. All too common

The village elder was dismissive of my horror, saying that this kind of thing happens all the time in the western district of Kisii. He told me about Joseph Ondieki, whose mother had been burned to death less than two months earlier.

I found Joseph and his wife Mary Nyaboke tending vegetables in their small shamba, or homestead. Mary told me that on the day her mother-in-law had been killed she had been visiting her own parents. She had heard a noise and discovered the truth when she came home. She said that in the 20 years she had been married, she had never had any reason to believe her husband’s mother was a witch.

Joseph told me he has suffered a lot since his mother died.

“I was born here, but at this stage I feel as if this is not my home any more,” he said. “I cannot visit neighbours or relatives. Even when they see me standing by the road side, they point at me, saying: ‘That is a son of the witch’. And when I go to town they also start wondering what has taken me there. Is it that I am going to give evidence against them? When I come back, they say I’ve been seen at the police station, but I’ve never been there. I’ve never reported the matter.”

“If I visit the neighbours, I always fear that they might put poison in the food. So when I’m forced to visit, I make sure I don’t eat anything. If I can’t get my own food I just have a glass of water and sleep.”

I set off with Joseph up the hill towards his house, which was far from the centre of the village. On the way we passed his mother’s house.

A neighbour was reluctant to talk to me and denied even knowing Joseph’s mother.

“Here in Kisii, people are being burned on mere allegation and most of them are old,” Joseph said. “We now don’t have any old people in the village to consult. Even me I’m now approaching 50 years old – I’m afraid that they’ll come for me also.”

I spent three days in Kisii trying to speak to the authorities, but nobody, neither the police nor the local government officials would talk to me.

As night drew in, and it was time for me to leave, Joseph walked with me from his village to where my car was parked. When we arrived, he begged me to take him with me to Mombasa, where I am based.

It was very difficult for me to leave him behind.

As I drove away I passed signs pinned to trees, warning witches that they would be tracked down.

“We know you by your names”, someone had typed in bold.

=======
To listen to the full broadcast of Kenya’s Witch Lynchings, tune in to African Perspective on the BBC World Service.The program is first broadcast on Saturday 27 June at 1106 GMT. It will be available online from 2106 GMT, for one week.